Vienna is a city of the arts: plays and concerts happen every night, and the Habsburg dynasty based here for hundreds of years were huge fans of collecting art and showcasing it in their museums.

We went to the Kunsthistorisches Museum. One exhibit showcased how these Habsburgs made “Kunstkammer” (collections) using pieces of art from their subject areas, places where they had conquered, trade, commissions, or gifts. 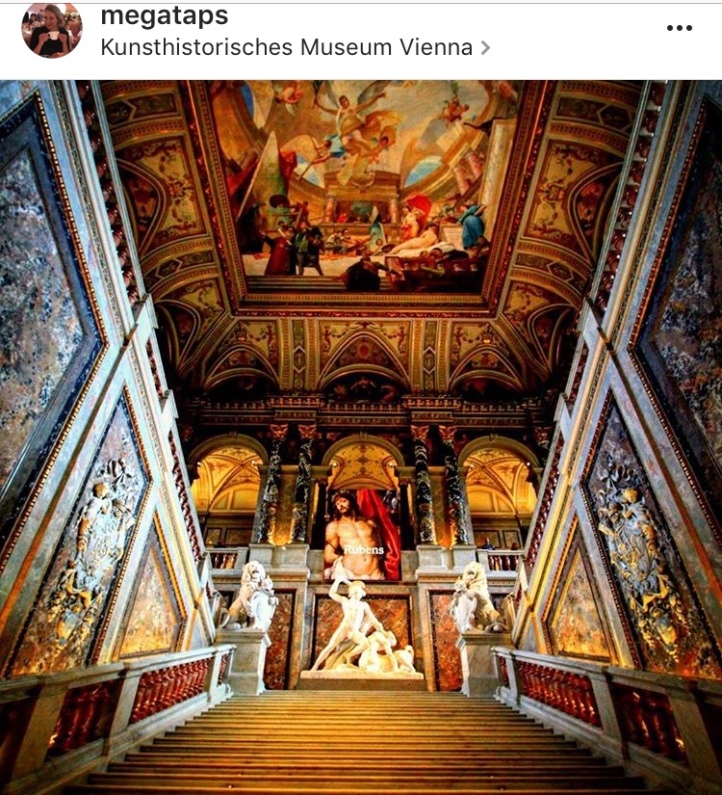 Think of having access to any item on Earth. (Caveat here: In 1400s Europe “On Earth” was the KNOWN earth. This meant what we consider to be “Europe” and some of Northern Africa).  You could have all of those things, and when you did have them, people thought “Damn, this guy has a lot of things – he must have power, he must be a king!”

This is how the kings of this time thought. So they went about collecting as much stuff as possible – but only the nicest things. If you’e not collecting the nicest of things, you’re probably hoarding. It didn’t even matter if the art didn’t DO anything – “nonfunctional art was a collector’s item” – because even if it didn’t actually do anything, it still reinforced power & status.

Their collections were so huge that they were considered  “Collections [that] represent knowledge of the world”  or an “archive of wisdom”. Their Kunstkammer” were effectively a Wikipedia of their time.

Here’s a funny thing: while the Nobility & aristocracy was collecting things, scholars were trying to classify them. These classifications “influenced collecting practices probably rather little”.  (This reminds me of a quote from one of the Bush administration “We’re an empire now, and when we act, we create our own reality. And while you’re studying that reality—judiciously, as you will—we’ll act again, creating other new realities, which you can study too, and that’s how things will sort out. We’re history’s actors…and you, all of you, will be left to just study what we do”.)

I imagine that kings & other royals collected things because they caught their eye, and because they believed they deserved anything they wanted, so they took it. then the scholars said “these things represent everything that exists”.

Sometimes the art was put to use – as a propaganda tool.

Propaganda’s root is ‘propagate’ which means to spread, breed, proliferate. Think about it as an idea spreading.

Maximilian used art to show he was King, a leader, and to show his ‘glorious deeds and accomplishments’ – and to underscore the legitimacy of his rule. This is still done today! The more something or someone is seen/heard in public – the higher importance we give to that thing. Put a face in every classroom in the country and say and that person becomes very important, even without a “This is the President – they are important!” sign next to the image.

Sometimes it art is just collected for the sake of having it.

When Mary of Burgundy (which somehow meant this is northern France & the Netherlands) Married Maximilian 1 ( definitely a Habsburg) gave the Habsburgs connections in other countries (Burgundy?), and thus they ruled over a larger area of land. Their kids and their grandkids further expanded the rule. But there was a fracture between two brothers in the 1500s, and the spanish lines and austrian lines were created.

Their daughter Margaret started hoarding / collecting stuff, put it in her room in the Netherlands, and this was the first instance of a Kunstkammer (art and natural wonders’ cabinet). Following her example, her nephew was Ferdinand I who created a Kunst Camer in Vienna. This was in 1554.

Around the same time, Archduke Ferdinand the 2nd (Guessing this is Ferdinand I’s kid), built an entire castle. He called “Ambras” castle which was meant specially to keep his collections of stuff. One collection of stuff was supposed a ‘small scale universe’ of everything in the known world on a specific theme.  By putting all of their artifacts in the same place – a room in this castle – they created something which they called “musaeums”.

So here’s a quick way to show your power:

Collect high-quality things.
+
Itemize them, and share their history.
+
Put them in a room. Preferably in a Castle. Rent an AirBNB if you can.
+
Invite your friends, family, work friends, classmates, enemies.
+
Hire someone to hold a clipboard and just nod while staring at your pieces.
+
Take Photos and post on social media.
=
Profit & Power.